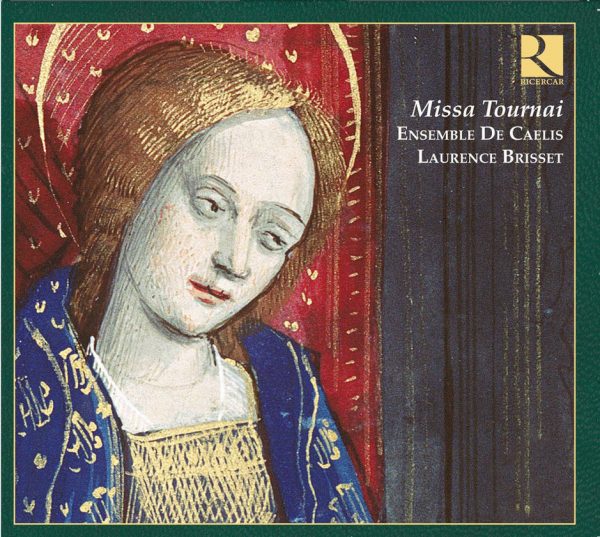 Jubilant, virtuoso, filled with light and inspired by the work of the musicians of the Papal Chapel in Avignon, the Messe de Tournai is undoubtedly the oldest polyphonic Mass to have survived.

Dedicated to the Virgin Mary, it has the breadth and majesty of the greatest works of Gothic architecture. The Mass is a compilation and not a single work: its composers are unknown and the various sections were written in different places at different times, although they seem to have been compiled and copied by one single scribe. This Mass is both archaic and ground-breaking; it provides a fine demonstration of the upsets engendered by the transition from the Ars Antiqua to the Ars Nova.

Recording, editing and production:
Jérôme Lejeune
Recording made at the Eglise Saint-Apollinaire in Bolland, Belgium
Ricercar, distributed by Harmomia-Mundi

Classica Répertoire Juin 2008
« Luminosity and clarity: the De Caelis ensemble embodies these two words in both plainsong and polyphony. Their sound is filled with light and is crystal clear in contrapuntal passages; its supple fullness and suavity contradict this repertoire’s reputation for austerity. One particular quality of the ensemble should be stressed: its ability to breathe an irrepressible rhythmic pulse into the contrapuntal lines. »
Sophie Roughol

Res Musica, juin 2008
« One of the most important works of the repertoire, its timeless and overwhelming beauty is deeply modern in its expression as much as in its composition. De Caelis make us hear the melancholy sensuality of this music and shake the polyphonic architecture of this music to its foundations. These voices contribute to the poetry of the intermingled sacred and profane texts and to the colours of the stained glass windows, reflecting the thousand facets of a spirituality that seeks itself and is confronted with the infinite silence of the celestial spheres. »
Monique Lepelletier

Diapason, juillet 2008 4 diapasons
« The fine work of this group specialising in mediaeval counterpoint has provided us with a remarkable version, one that is undoubtedly the best available, of one of Philippe de Vitry’s most impressive motets. Their timbre, theirmusical intentions and the colours of the music itself guarantee true moments of grace. De Caelis have provided proof of their supremacy… »
David Fiala

Back
By continuing your visit to this site, you accept the use of cookies.OkLearn more