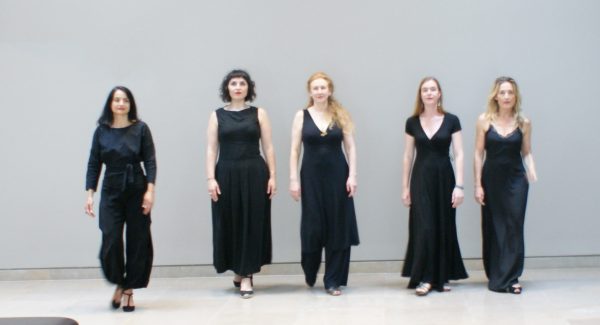 This program associates the sacred song of the western Middle Ages with the mystic poetry of the East, improvised, according to the learned tradition of the Radif, the Persian classic song, on texts of the big mystic poets of medieval Iran.
In 2009, Radif is registered as immaterial cultural heritage of the humanity by the UNESCO.

This program gives voice to the feminine figure of the medieval West and the East of today in a music of the ecstasy and the delight. Pray for peace is inspired by the angels, the mediators of the invisible, who populate the sky of the Christians, as that of the Jews and the Muslims. The word angelus comes from Greek aggelos, it corresponds to the mal’ak in Hebrew and in Arabic which means messenger.
This program consists of Gregorian pieces and anonymous polyphonies of the XIVth century having a dialogue with the exceptional voice of Sara Hamidi, improvising, like an invocation wich comes from the other heavens, for the time of a peace prayer. The voice of the women was often kill in the world. It is it even today in numerous countries, as should be a witness this young Iranian singer who breaks the prohibition made for the women occur in public and chooses the exile rather than the silence.
Sara Hamidi improvises according to the model of Radif, taught orally as the tradition requires it.
In Radif, it is about characteristic melodic motives for every mode. The interpreter has to know them by heart to use them as material of his improvisation.
Iran is the country of the archetypal poetry. The singer chooses the texts on which he will improvise. In this program, Sara Hamidi will sing the poetry of Khayyâm, Haafez and Rûmî.
This meeting, o how much symbolic, highlights the affinities of two civilizations of the medieval world. Breath, melismas, sound arabesques, ornaments and modalities find themselves in both traditions. So they can answer, unite without becoming confused nevertheless ever.