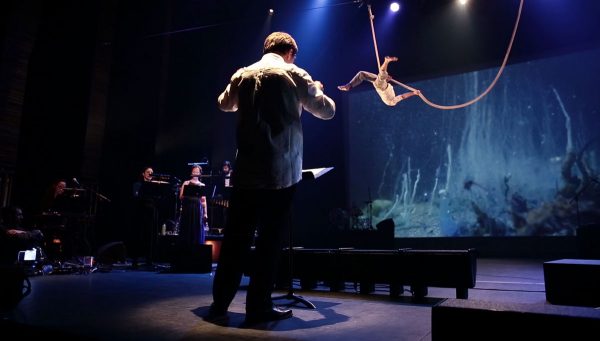 The hypnotic music of Steve Reich has a dialogue with that of Pérotin, Pink Floyd and Stockhausen. The public is in the heart of the creation of Jonathan Bell which encloses this show.

CONSTELLATIONS traces out a poetic and oneiric path between dramatic expression and a wide variety of musical styles: a resonant and visual constellation of suns, suspended and evocative like a lunar image in a dreamlike moment.

CONSTELLATIONS is a story of encounters: initially between the Links and De Caelis ensembles, then between Pérotin’s Ars Antiqua music and that of Steve Reich, to create a spellbinding and original work incorporating music, circus and video.

Bringing together musicians and visual artists, the Links Ensemble has set itself the task of inventing new, often participative concert formats. In their desire to encourage amateur choruses to perform contemporary music and make it more fun and more accessible, it was only natural for Links to come together with the De Caelis Ensemble, a specialist in medieval music and contemporary creation.

The two ensembles will be presenting Proverb by Steve Reich, with forays into Pink Floyd and Stockhausen. There will also be modal improvisations inspired by Pérotin’s Organa and Jonathan Bell’s piece Le temps des Nuages, composed for the two ensembles and an amateur chorus to a text by Michel Onfray. Taken from his book Recours aux forêts, published by editons Galilée, it is a poetic and philosophical meditation on the need to set one’s destiny in nature and the cosmos.

Pérotin’s music dazzled the West by its inventiveness. The use of rhythmic forms, numerous repetitions and imitations, gives it a stimulatingly exhilarating, quasi-hypnotic quality. Clearly,  a fertile source of inspiration for Steve Reich.

At IRCAM, Jonathan Bell has developed a process that allows an amateur chorus to receive musical instructions via a mobile telephone, thus gaining access to the creative process without the often formidable barrier of score reading.

Specifically created for the performance, the chorus is dispersed among the audience. The spatialised sound leaves the listener immersed in a unique experience.

To lend image and substance to the musical programme, the artists’ collective  has devised a world in motion. An ethereal universe comprised of fascinatingly spectacular poetic colours and forms that bring together the aerial  choreographies of Circus performer Julien Cramillet and the chemo-hypnotic videos of visual artist Hicham Berrada created in real time on stage. CONSTELLATIONS will explore all the theatre’s public areas to offer an astonishing sensorial adventure that has to be felt and experienced in total immersion.

A melting pot where get involved sacred texts from the Bible, contemporary music, new technology and early music. In a hyper connected world, Jonathan Bell takes an artistic look by puting the alive, the sensitive at the heart of the human-machine relation.

A cutting-edge technology for musical creation. Jonathan Bell invented a transmission tool allowing for the orchestration of numerous human and electronic sources. The performers, five vocal soloists and an amateur choir, use their smartphones and headphones all connected through wifi, in order to participate together to the elaboration of the same piece. He thus conceive a human-machine dialogue, as well as a machine-mediated dialogue between humans, both a technical and poetic achievement. Each performer is provided with auditory cues: pitches, rhythm and text. The composer therefore finds an affinity with the musical practice of Middle Ages, in which hearing was of greater importance than sight.

In his musical writing, Jonathan Bell carries the influence of the French spectral school. The harmony is generated from the analysis of sound spectra, and uses a mixture of natural voices and synthesised sounds. The choir rehearses the piece with the De Caelis ensemble, and can therefore fully join the performance during the concert .

An ancient part fulfills the program: pieces of the 12th and 13th Century, monodies and polyphonies of the Ars Antigua. This innovative art of unprecedented beauty found imitations throughout Europe, and so was later called École de Notre-Dame de Paris, with anonymous masters as well as Pérotin and Léonin.

The Smartvox project allows unexperimented music readers to participate to musical materials hitherto reserved to experts. Our ambition is to discover this music from the inside, through experimentation. Smartphones give here autonomy to each singer, and allows them to tune and keep in time with each other, even in complex microtonal or polyrhythmic passages. The setup allows here professional singers to convey their knowledge and passion through a direct interaction with singers of all levels, immersed in an unknown soundworld.

This process also permits new forms of concerts and music making. The listener is immersed in a mobile sonic architecture. A choreography of slow movements, also guided by the smartphones’ screens, will evoke at times forms of rituals. Some light projections will also underline the movements of the choir, thus adding to the visual dimension of the concert. 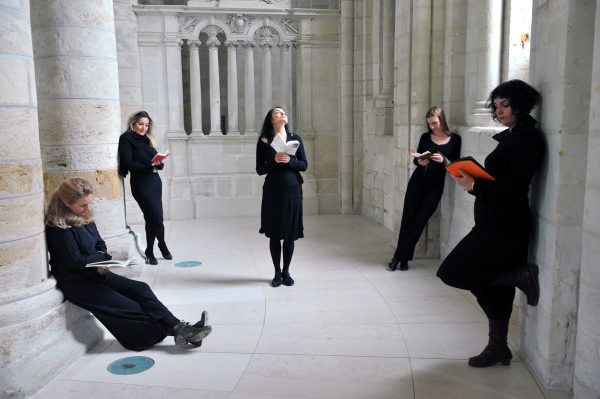 The book of Alienor

An exceptional program between sacred and profane that pays tribute to two great female figures of history: Eleanor of Brittany and Eleanor of Aquitaine.

Program premiere : 26th of September of 2015 in the Royale Abbey of Fontevraud

Monophonic and polyphonic parts of the Gradual of Eleanor of Brittany (thirteenth and fourteenth centuries) precedes “The song of William of Aquitaine”, piece of the composer Philippe Hersant, inspired by a poem by William IX, grandfather of Eleanor of Aquitaine (ordered by the Fontevraud Abbey).

In this program they are from the Gradual songs from the Mass for the Vigil of the Assumption, sequences and two polyphony, improvised polyphony as it was in then. Joined the program three pieces of English origin that could have been sung in fondations from Fontevraud in England, as Amesbury where Eleanor of Brittany was born in 1275. Gradual of Eleanor of Brittany is exceptional. Richly illuminated, it consists 301 sheets. After a stay at the English convent of Amesbury, Eleanor of Brittany arrives at Fontevraud in 1290 and pronounced her vows there. She becomes the sixteenth abbess in 1304 and at his death in 1342, she bequeathed the Gradual with her coat of arms. This is a unique source for the study of the practice of Gregorian chant in the thirteenth and fourteenth centuries. In 2013, Xavier Kawa Topor and Françoise Baudin, directors of the Fontevraud Abbey – Cultural Encounter Centre, ask Oulipo poets to imagine that read Queen Eleanor of Aquitaine. In 2013, a book is published that opens with an enigmatic poem written by William IX, first troubadour and grandfather of Eleanor of Aquitaine: Farai a verse from dreit nien, that is to say “I make a nothingness pure singing. ” It is this text that Philippe Hersant chose to set to music. Two songs of troubadours held him company, one of Guiraud Riquier (1254- 1292), one of Guirault Bornelh (1162 to 1199).

Listen to the album 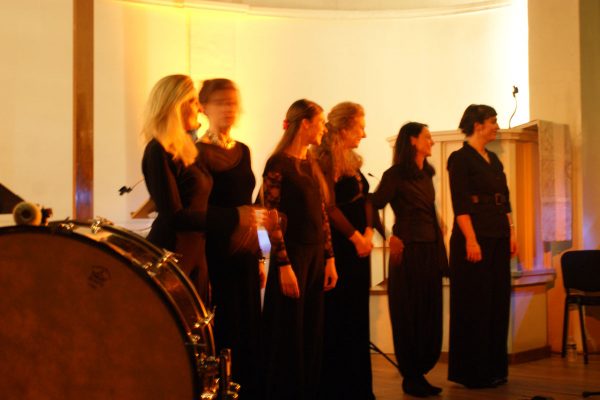 From secret to sacred between yesterday and today.

Hildegard’s ecstatic song stimulates the language of today. Zad Moultaka inlays the very depths of his cultural inheritance with flashes of light, diamonds, mortar fire and passages of sound-bearing light. Linking these pieces together, crossing the layers of memory and of time as one crosses walls, he cuts a path into our imaginations.

A co-production between De Caelis and the Festival de Saintes.
This programme has benn recorded and edited by L’empreinte Digitale.
GEMME ED13241 © L’empreinte digitale 2015
www.empreintedigitale-label.fr 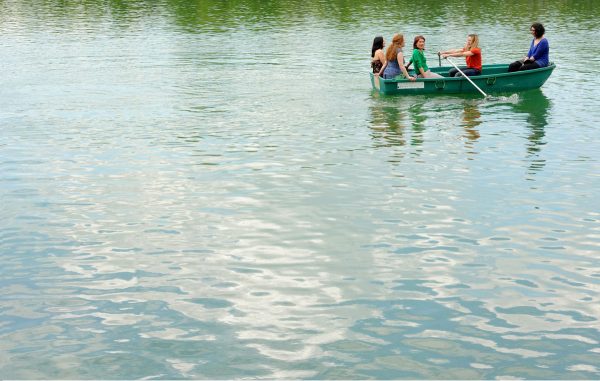 The effects of english channel

English music of the 13th and 14th centuries

The English Channel has always been a link between France and England just as much as it has separated them. Love and hate were constantly at war in the hearts of those who dwelt on those shores. After the Norman conquest — or invasion, depending on the point of view taken — of England by William the Conqueror in 1066, the lands beyond the Channel became French-speaking and continental in culture. From that time onwards Norman French was spoken by the intellectual and social upper class; it remained the language of breeding and of culture until the end of the Hundred Years’ War.

This programme demonstrates the great variety of musical genres used during the 14th century by English musicians. Apart from the two large manuscripts of St. Andrews (1230) and Old Hall (1415), there are only fragmentary sources remaining of other works composed in the British Isles during that period; nonetheless, these two large manuscripts give a very clear picture of the musical culture of almost two centuries.

Musical styles travelled rapidly during the 13th century and Parisian polyphony of the Gothic period, otherwise known as the school of Notre-Dame, swiftly became established in England. The Parisian style and its techniques were pushed to their limits, this taking place well after organum and the conductus had been abandoned elsewhere. Hybrid genres such as the conductus motet and the trope motet were created. The blending of all these genres as well as the frequent use of canonic imitation, of passages vocalised on one syllable, of the inversion of voices with or without text, of the possibility of using the cantus firmus in the middle voice, and of homophonic technique were all characteristic of the English style of composition. We should also add to this their taste for intervals of thirds and sixths and, of course, the addition of texts in Norman French to works originally set to Latin or French texts.

This programme is made up of motets and conductus from English manuscripts dating from the 13th and 14th centuries. 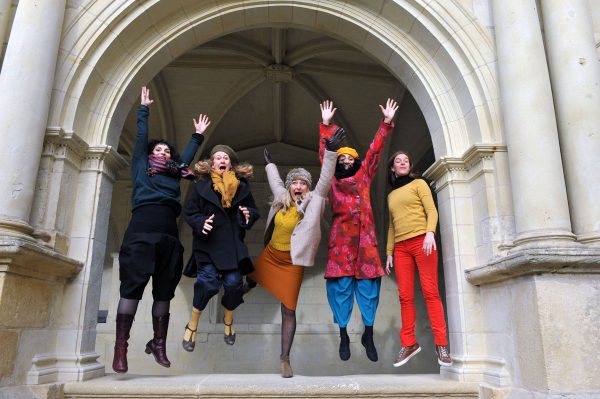 Did you say medieval ?

A concert with narrations for people of all ages and tastes

The Ensemble De Caelis presents a programme for people of all ages and tastes, a lively and original way to discover the Middle Ages through their music. Why was this period called ‘middle’? What happened then? What music did Charlemagne listen to, what was Richard the Lionheart singing when he returned from the Crusades, what tunes did Heloise hum gently to Abelard, what songs lifted the pious souls of St. Louis during Mass and of Joan of Arc and du Guesclin before their respective battles, which songs gladdened the hearts of the goliards, of Robin and Maid Marion, of all the minstrels, troubadours and trouvères of every region of France, of every happy or unhappy lover? We will attempt to show you some of the musical riches of this astonishing period of history and to explain a few things that will let you appreciate them even more. This is an entire section of our artistic heritage just waiting to be rediscovered — and all you need to bring is your curiosity; you won’t believe your ears!

Your personal data choice
This website and its partners use cookies to make your visit more pleasant and to compile statistics.
You can now make your choice using the buttons below.
We will keep your choices for 1 year. However, you can modify them at any time by opening the small tab at the bottom of the site.
Manage options Manage services Manage vendors Read more about these purposes
Settings
{title} {title} {title}