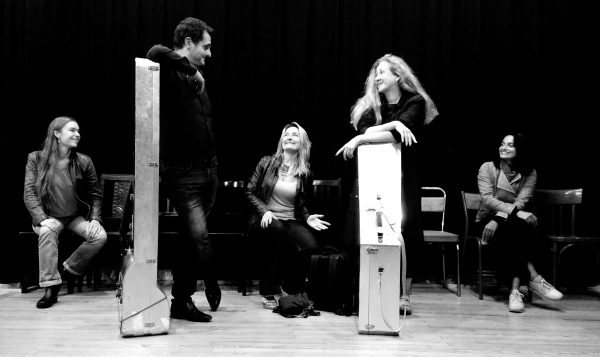 Musical entertainment in the courts of Avignon and Florence at the end of the XIVth century.

At the turn of the 14th and 15th centuries, the courts of Avignon and northern Italy played host to brilliant artistic circles where the greatest musicians shone. Crafting a treasury of musical “gems” through technique and stylistic erring, they invented unusual and entertaining combinations. It was customary to sing and play, especially among ladies. The clavicytherium and the organetto accompany this programme. 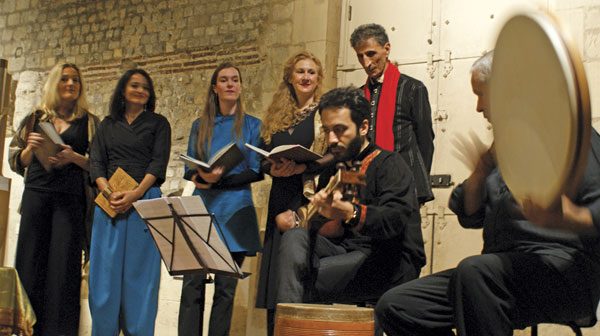 The singers of the Ensemble De Caelis invite the Iranian singer Taghi Akhbari and the târ player Nader Aghakhani to debate the arts of love. Their two musical arts, two of the most sophisticated of the mediaeval world — traditional Persian song and Western song of the 12th to the 14th centuries — engage in musical dialogue.

The refined vocal art of Taghi Akhbari reacts and responds to the love songs of the troubadours and minstrels as well to the polyphonic works of Guilllaume de Machaut as he improvises on texts by the Persian poets Khayyâm and Rûmî.

Ghazal is a style of courtly poetry that was often sung and that flourished in Persia during the 13th and 14th centuries. Sensually coloured, its use of metaphor linked earthly with spiritual love.

Trained since his youth in the refinements of Persian song, Taghi Akhbari’s education was oral in character and passed on directly as tradition demanded. Even now he practices his art each day according to tradition by creating improvisations based on the works of Rûmi and Omar Khayyâm.

The echo of the Sibyls has been heard since ancient times; set to music and sung from the 10th century onwards in several regions of the Mediterranean, the song of the Sibyl proclaims the day of the Last Judgement. It is unusual to have these ancient Greek prophetesses delivering their oracles in the heart of the Christian liturgy: in fact, the Fathers of the Church sought to reinterpret the Sibylline oracles, in particular the 8th book that is attributed to the Erythrean Sybil, making them appear to predict the birth of Christ. St. Augustine made a Latin translation of the relevant sections under the title of Iudicii signum.

The Christian text containing the Sibylline prophecy first appeared in the Iberian peninsula during the 11th century; from the 13th century onwards the Song of the Sibyl was sung in the local languages: Occitan, Castilian and Catalan.

This concert allows us to hear once more from the prophetesses who have proclaimed the coming end of the world over the centuries. Philippe Hersant’s Les prophéties des Sibylles, a commission from De Caelis, makes use of two versions of the Catalan Cant de la Sibilla (14th and 16th centuries) as well as polyphonic settings of the Prophecies from mediaeval and Renaissance Spain.

Your personal data choice
This website and its partners use cookies to make your visit more pleasant and to compile statistics.
You can now make your choice using the buttons below.
We will keep your choices for 1 year. However, you can modify them at any time by opening the small tab at the bottom of the site.
Manage options Manage services Manage vendors Read more about these purposes
Settings
{title} {title} {title}